Welcome to our World!

Can you ever be lucky and unlucky at the same time?

Like most other people with better things to do with their lives, we’ve never wasted much time worrying about trivial questions that are, let’s face it, not going to leave you any wiser. They’re pointless.

How can you possibly represent two polar opposites at one specific moment?

The answer is you can’t. But depending on your ability to lose literally minutes of your life to deep thinking, you may agree that one life-changing negative can sometimes make way for a lifetime of positives.

In October 2018, during our honeymoon to the South Pacific, we were involved in a plane crash in Vanuatu.

Our lives have been flipped upside down and shaken like a backpack being emptied of all its contents without care. But our worst day will (we hope) end up steering us to a more meaningful, exciting and satisfying future.

It has already given us new motivations, including setting up this hugely (un)interesting and (un)insightful travel blog, and as we have a re-think about what we really want we’re now appreciating the things that truly matter much more than we ever did before.

We’ll also be sharing our recovery ‘journey’ as we attempt to cope with mental health issues following the crash, and hopefully we can inspire some of you to get up, look up and see the world through your faces, not your phones. 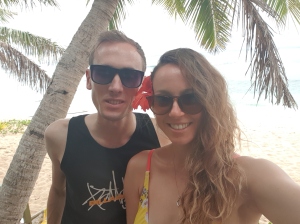 Having met in the summer of 2010 and enjoyed short breaks together in the French Alps and Turkey, it wasn’t long before we reduced those cherished numbers in those things called banks to zero with one-way tickets outa here!

“Here” at the time was Jersey, Channel Islands, and although that “one-way” ticket didn’t end up being what the name suggests (yup, writing from the same little chunk of rock between England and France) we did spend over a year globetrotting together in 2012/13.

During that time we uncovered our passion for exploring new countries and cultures, and after ticking off Vietnam, Cambodia, Thailand, Malaysia, Singapore, Australia and New Zealand from our bucketlist we returned home with a plan many travellers have plotted before…

Get less poor quickly through a dead-end job, and leave again asap.

Instead of dead end jobs we found enjoyable careers in sports journalism and real estate, and three years later we got engaged on top of a French mountain. In September 2018, Sally officially became a Fox in the grounds of a 400-year-old castle.

Married with a mortgage and pet cockatiel named Joey … you’d think we’d be “settling down” soon.

No chance. Life has given us a boot up the behind, and we’re going to act.

Welcome to Fox and Vixen Travels!

One thought on “Hello from us!”

This site uses Akismet to reduce spam. Learn how your comment data is processed.